How to Spend More by Spending Less

A True Story About The Nigerian Federal Budget

A month earlier than has been the case in the last three years, President Muhammadu Buhari presented his proposed 2018 budget which, as usual, will see the federal government attempt an expansionary fiscal policy. Specifically, the government proposes to raise fiscal spending by 16 percent to a record N8.6 trillion from the previous budget peak in 2017. To finance the budget, the Buhari government projects its share of fiscal receipts at an unprecedented N6.6 trillion – no previous revenue projection has ever crossed the N5 trillion mark.

Central to the higher spending outlay is a 17 percent rise in non-debt recurrent expenditure to N3.49 trillion, itself a reflection of a 66 percent jump in largely discretionary ‘service wide votes’to N945 billion and a 12 percent rise in personnel expenses to N2.1 trillion. The increase in the latter, which has been static at N1.8 trillion for several years, alongside the rise in service wide votes - a slush fund for amnesty payments to ex-militants, the military campaign against Boko Haram and APC special projects among others - lends credence to the claim that the budget is indeed about 'consolidation'. Not of the fiscal or economic connotation as implied in the budget tagline but more about laying the groundwork for the political consolidation of the ruling APC party ahead of the February 2019 elections.

Aside that, the net result of increased borrowing at higher interest rates on the local side is the sustained uphill climb in debt service costs which will climb 21 percent to N2.2 trillion (inclusive of a sinking fund to retire maturing debt). Added to that is a more forceful directive that the Central Bank of Nigeria (CBN) drive lower interest rates across debt markets (which it can).Therefore, to make the budget easier for the public to digest, the government raised capital spending by 12 percent to N2.4 trillion.

To fund this heroic budget, the government assumes oil revenues of N2.4 trillion driven by projections of average crude price and production of US$45 per barrel and 2.3 million bpd(inclusive of condensates) respectively. Both appear reasonable in the light of recent tightening across global oil markets and largely stable domestic oil production as financial pacification of the Niger Delta militants continues to buy peace. OPEC’s decision to cap Nigeria’s oil output at 1.8million bpd (exclusive of condensates) means Total’s Egina project, which is likely to come online over 2018 could run into problems.

As with prior years, though company and personal taxes are forecast to decline in 2018, other non-oil revenue assumptions are leavened with the yeast of optimism. Independent revenues which the government forecasts at N847 billion is well ahead of its peak in the last five years of N323 billion as the Buhari government somehow expects to extract more money from its own agencies. In a similar vein, the government expects up to N512 billion in recoveries from its anti-corruption drive which, like its more bark than bite approach, is unlikely to net anything significant.

In all, while oil revenues appear reasonable, doubts exist over the non-oil revenues (63 percent of total) to ensure the fiscal deficit remains at the implied N2 trillion mark (1.8 percent of GDP).

However, regardless of the likely shortcomings in revenues, the government is likely to meet its fiscal deficit target as is familiar to keen observers of actual Nigerian budget implementation. Even with disappointments across revenue streams in the last two years, the government has managed to post actual fiscal deficit of 1.6 percent and 2.2 percent of GDP simply by cutting back on capital spending. Thus, the trick is always in the optics of inflating capital spending when presenting the budget and then slowing down implementation rates accordingly to ensure fiscal discipline remains under the statutory 3 percent of GDP.

So, who is fooling who? In real terms, government spending has contracted over the last five years even as its share of the aggregate economy has gone down.

Spending has increased even though spending has reduced.  It's a bit like magic. 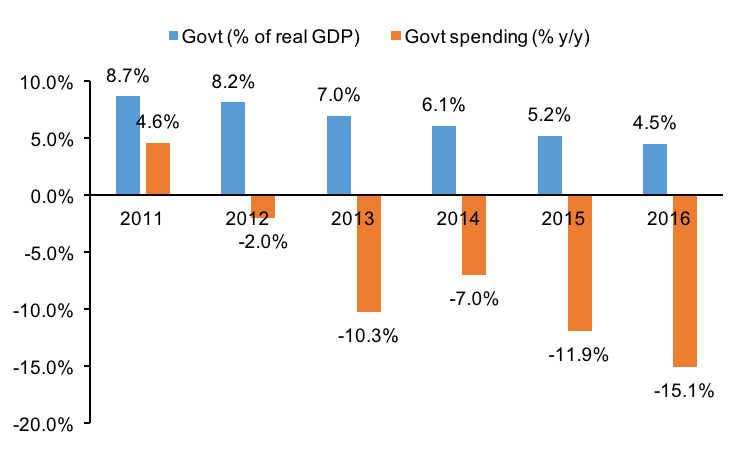